Suicide is not the Unpardonable Sin 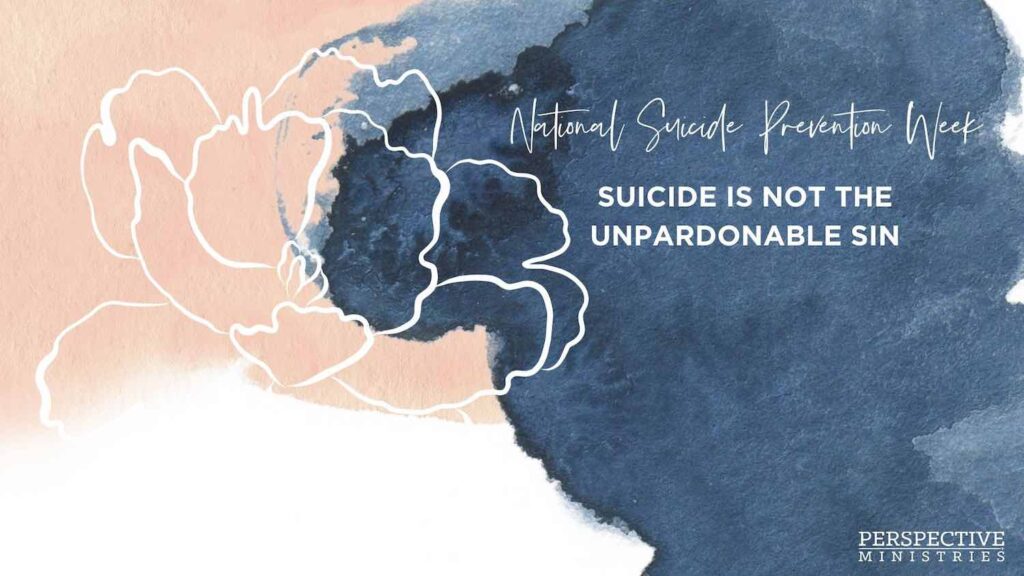 (If you are thinking about suicide, are worried about a friend or loved one, or would like emotional support, the Suicide Lifeline network is available 24/7 across the United States, please call 988 or 1-800-273-8255)

These comments were based on the wrong theology. The circumstances of his death were horrific enough without the voice of others amplifying the tormenting questions that were already flooding my heart and soul.

I am confident that if my husband had a saving covenant relationship with the Lord Jesus Christ, nothing—not even suicide—would
separate him from God and His love. If he was united with Christ, he was saved by grace and not by his own works of righteousness or
lack thereof, and the blood of Jesus Christ is able to cleanse him and keep him.

Willfully terminating human life is a sin. Many seem to question whether it is unforgivable, automatically condemning the offender to an eternity outside of the presence of God. The short answer is no, absolutely not, based on the Word of God. Suicide can evoke intense theological discussion. Fortunately, most religions today do not teach that death by suicide will automatically send one to hell, although this merciless thought persists in the minds of many. Sadly, some grieving people have turned away from God as their ultimate source of comfort because of this misguided belief which generally follows this line of reasoning:

“What shall we say to these things? If God is for us, who is against us? He who did not spare His own Son, but delivered Him over for us all, how will He not also with Him freely give us all things? Who will bring a charge against God’s elect? God is the one who justifies; who is the one who condemns? Christ Jesus is He who died, yes, rather who was raised, who is at the right hand of God, who also intercedes for us. Who will separate us from the love of Christ? Will tribulation, or distress, or persecution, or famine, or nakedness, or peril, or sword?… But in all these things we overwhelmingly conquer through Him who loved us. For I am convinced that neither death, nor life, nor angels, nor principalities, nor things present, nor things to come, nor powers, nor height, nor depth, nor any other created thing, will be able to separate us from the love of God, which is in Christ Jesus our Lord.” (Romans 8:31-37 NASB).

“I know the plans I have for you,” says the Lord. Plans designed for each person by the Lord Himself. Plans to bring each person to a good end and not a disastrous one. Plans which can be disrupted and never fulfilled because of a human choice to surrender to deception. Eternal salvation is not based on our works but on the work of Jesus Christ. The choice of suicide will not keep one from eternity with the Lord if he/she places his/her trust in the blood of Jesus Christ.