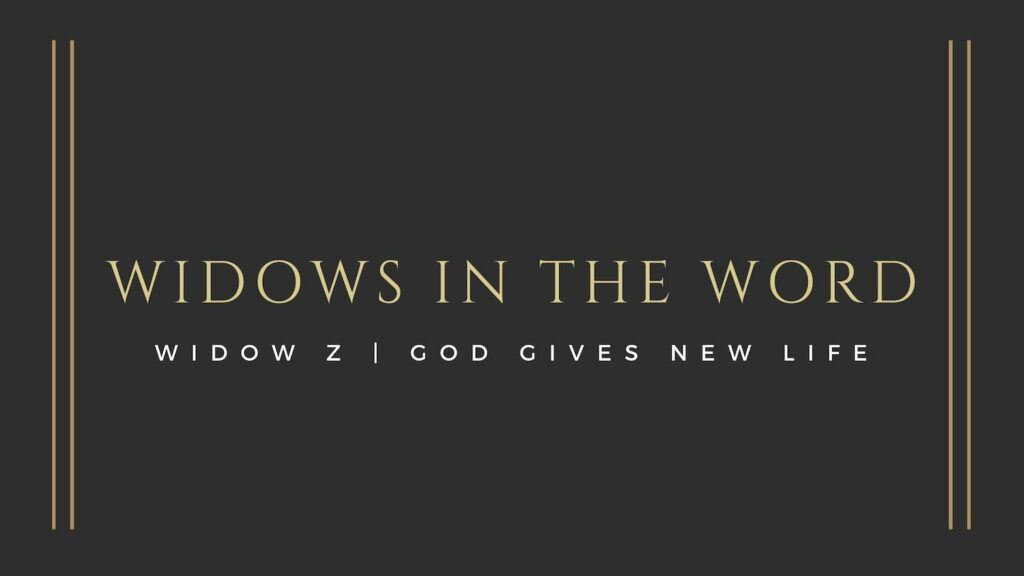 Widows, often unnamed, are scattered throughout the Bible from Genesis to Revelation. The limited detailed biographies of these ladies who have been left alone offer a treasury of wisdom, encouragement, challenge, and hope reminding us that it is always good to put our trust in God.

She was a young mother, living alone as a widow in a big city, Zarephath, with evil leaders who sought to put to death God’s messengers. Food and water were scarce, death seemed imminent and Widow Z was scared.

No doubt she had heard of the prophet in the land and the reality that his declaration to Ahab and Jezebel that there would be a drought in the land had come to pass. However, never did she dream this wanted man of God would show up, while she was picking up sticks, requesting a cup of water and her last breadcrumb.

How could this be? Here stood Elijah, the man on Jezebel’s hit list asking for her last meal announcing the supply of bread and water would match her need if she honored his request.

“Then Elijah said to her, “Do not fear; go, do as you have said, but make me a little bread cake from it first and bring it out to me, and afterward you may make one for yourself and for your son. For thus says the LORD God of Israel, ‘The bowl of flour shall not be exhausted, nor shall the jar of oil be empty, until the day that the LORD sends rain on the face of the earth.’”   1 Kings 17:13-14

She was in the middle of a mess destined to end in the miraculous. Perhaps it was the little bit of hope from God’s promise that enabled her to take a step of faith, and another, and another as the Widow Z had heard of Elijah’s amazing God. Faith became sight and God’s Word was true – the bread and water did not run out for two whole years!

Scripture shares there were many widows living in the land however the Widow Z was the one chosen to play an important part in history. She may not have known the specifics of God’s command for her life, but through step-by-step participation in the unfolding unseen story of God, she experienced the miraculous. When fear knocked, she kneeled. When death triumphed, resurrected life restored her spiritual brokenness.

“And in Your book were all written the days that were ordained for me, when as yet there was not one of them. How precious also are Your thoughts to me, O God! How vast is the sum of them!” Psalm 139.

The story doesn’t stop there as each day has enough trouble of its own. Her circumstances went from bad to worse when her fatherless son died. She blamed herself and quickly shifted the blame to Elijah, yet all the while God was in complete control! Fortunately, this man who walked with God knew just what to do—grab the boy and run to God, the One who not only hears our cries but brings life out of death.

She wasn’t cast aside but set apart for a bigger story in history—His (God’s) story, right alongside the kings and prophets. God took care of her. She gave her all and received abundantly. Their story became her story. She was an empty vessel filled for God’s glory. God brought her in so he could make himself known to her. She had value, worth, the covering of God, His great love reaching out to demonstrate that she was not forgotten. She did nothing while God did everything. God brought a man of God to her, representing the body of Christ, leading her to put her trust in God. Elijah was the first step to her salvation. When the curtain had closed on her darkest hour, there was an encore to the story—even in death, God resurrected life.

“And He said, “Truly I say to you, no prophet is welcome in his hometown. But I say to you in truth, there were many widows in Israel in the days of Elijah, when the sky was shut up for three years and six months, when a great famine came over all the land; and yet Elijah was sent to none of them, but only to Zarephath, in the land of Sidon, to a woman who was a widow.” Luke 4:23-26

How is God at work in your story? Jesus stands ready to interject powerfully the miraculous into our mundane activities—even while picking up sticks or the pieces of our lives. Pay attention to the “behold moments” where God is at work.

Accept death as God’s grace-filled plan to give you new life.

PrevPreviousA Resolution to Keep Going
NextCovering the Widow in LoveNext