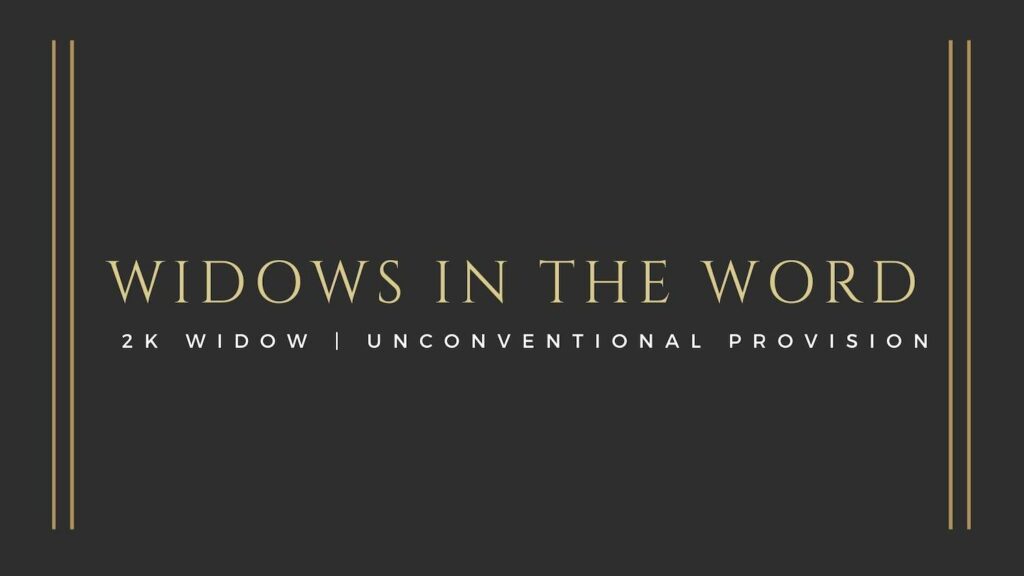 No doubt the minute you entered this valley of transition, money crossed your mind – or the minds of family and friends – carrying with it a variety of emotions. Immediate loss or gain of income, the need to go to work or quit work, the fear of low income or responsibility of new riches could be a part of the loss you are experiencing.

Even though many widows are reduced to living on a poverty level, others represent some of the wealthiest women in the world. Money has power. It can bring false security and attempt to fill a void that only Jesus can fill. Or it can be a tool the Lord uses to build His kingdom and test our hearts.

Studies abound that tell us what we already know: for the most part, the income of a single woman is less – sometimes dramatically – than the income of a single man. There may be bills, known and unknown, that pile up, and accounts and invoices we did not know existed and aren’t sure how to handle. This is not true for all women, but it is a reality for some. Either way, we must cultivate a deeper trust in the Lord, whether riches abound or poverty crouches at the door.

In 2 Kings we get to see first-hand a widow whose financial burdens lurk at her door. I love it when God highlights a woman in Scripture that many can relate to, especially when it’s a widow.  Our identity is not in our status whether married, single, divorced, or widowed; however, it is interesting that often when God performs a miracle of faith for or through a widow, He mentions her identity—widow. Perhaps He does this just so other widows can be encouraged or perhaps because those He has allowed to carry the title widow have a calling and purpose that only God can fill because of His title, Husband to the widow.

In order to excel in our role as widow, we must understand that it is our job description to walk by faith. We have a clear example of this through the widow in 2 Kings.

When the curtain opens on act one, our 2 Kings (2K) widow is distraught. She has circumstances and needs similar to ours…a family, bills, loss, and pain. She faces these daily battles all while the shadow of grief hovers over her, yet we will begin to see how she is always under the umbrella of grace.

Mrs. 2K just experienced the death of her husband. He was a godly man; in fact, he was one of the sons of the prophets (possibly Obadiah). Wow—a very important person to the people and to God! Let’s take a peek into her situation. Would God allow pain to knock on her door? After-all, her family had given their lives to the ministry! The answer is yes He will, and He does. We are never exempt from pain in the economy of God. It seems that the environment of suffering is His favorite place to rain His grace and display the rainbow of His great glory.

Creditors knocked on this particular day to summon the precious sons of this brand-new widow!  How could this be? Her husband just died, and now the city officials announce they have a right to her sons because of insufficient funds to pay her debt. My guess would be that many have received notice from the bank announcing ISF, insufficient funds! That declaration in itself stabs at our stomachs, but to face the removal of a child would be a stab to the heart!

At this moment of need she cries out to Elisha, the top prophet in the land, for help. Was access to this man of God really as easy as Scripture reads? Before Mrs. 2K could pack away the past, God had made a way for her present. Before she faced judgment for her debt, God sent the Judge to her defense. “God is a judge of the widow.”

Elisha asks, “What shall I do for you?”

The answer to the first question would be obvious, “Mr. Elisha, SAVE MY SONS!” I believe a secret lies within his reply. Elisha himself could do nothing for her outside of the amazing grace of God.

The second question, what do you have in your house?  Brings us to the place where all miracles begin—where we are.

Her response, “Your maidservant has nothing in the house except a jar of oil.” We know from past Bible precedence that this is the perfect setting for God to work—at the moment of last things and resources. (Oil is often symbolic of the supernatural work of the Holy Spirit.) When empty best describes the situation, we know that an eternal purpose is in the heart of God.

She was issued a command,

“Go, borrow vessels at large for yourself from all your neighbors, even empty vessels; do not get a few.”

So here she is at her end. Others now must be included in the story—her neighbors, of all people. I wonder if they had heard the news and gasped, “Poor widow (literally) to lose sons because of debt.” God is certainly able to perform a miracle without the audience of her neighborhood. However, in this crisis, the neighbors were summoned. After the jars were collected, the widow gathered her family, shut the door, and poured oil.

“Faith is the assurance of things hoped for, the conviction of things not seen.” Hebrews 11:1

The widow had to step out in faith. She had to GO to her neighbors (uncomfortable), she had to GET a lot (unquestionable), and she was to GAIN provision (un-natural provision that is) not only for her debt, but for the rest of her life. The miracle took place because of her faith, and her provision was measured by her faith.

We are encouraged in Scripture that a faith capable of moving mountains begins the size of a small mustard seed. However, considering Mrs. 2K’s testimony, mustard seed faith is just the beginning of what God wants to do in our lives. To the extent of this widow’s faith was the amount of her provision. Do we obey in the areas God calls us to? Are we willing to include others? Are there regrets over the amount of faith we offer to God?

“And it came about when the vessels were full, that she said to her son, ‘bring me another vessel.’ And he said to her, ‘There is not one vessel more.’ And the oil stopped. Then she came and told the man of God. And he said, ‘Go, sell the oil and pay your debt, and you and your sons can live on the rest.” 2 Kings 4:6-7.