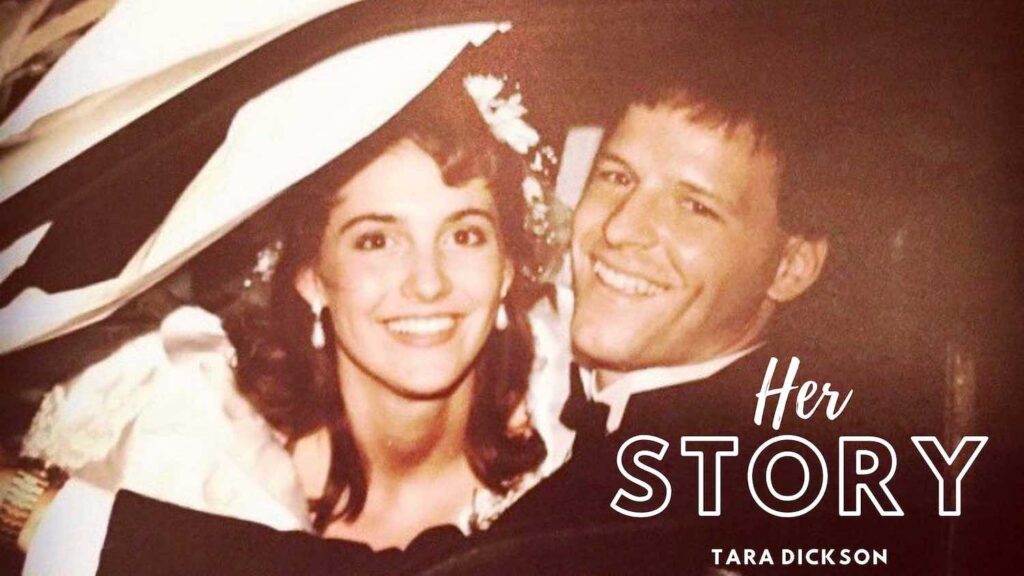 He was a year older than me and in our small-town high school it wasn’t “cool” to date someone younger, so he waited to ask me out until the summer after he graduated. I had watched him be the “big man on campus” for three years. Not because he was full of himself but because he was strong and kind. Anyone would tell you he was the strongest guy on the football team, and I watched him go out of his way to befriend the “least of these.”

It took us a few years to get our timing right. Which is code for God had to grow us both and the road wasn’t completely smooth. But in August of 1991, I married Alan and we settled down on his family’s farm to grow our family. After a few years of making the waiting list for medical school, but not actually getting in, and with a surprise pregnancy, he decided to pursue other work. I continued to have babies every two and a half years.

Life on the farm was wonderful! I homeschooled our four kids and always had a home business on the side. Alan loved working with our kids on their passions. He was so good at equipping and training the kids to work hard and do their best. We filled our days with tromping through the woods, taking care of animals, schooling, and various sports. We also talked about Jesus day in and day out.

Eventually, our secondborn decided God was calling him to leave homeschooling and enter a private Christian school. So, I followed him. I went back to teaching “in” school so that our three youngest could attend.

Life was full, and it seemed like so many dreams were beginning to unfold but one New Year’s Eve, everything changed.

Alan had been fighting an intense stomach bug, or so we thought. But that evening his speech began slurring and his steps were unsteady. So, we loaded up for a trip to the ER. None of us were prepared for the news. The routine CT scan revealed something. “Ma’am we found a shadow on your husband’s brain.” It took a while for the words I heard to connect with my brain.

The next few weeks were a blur of MRIs, surgery, and confirmation that Alan had stage 4 glioblastoma. A massive tumor resting on his frontal lobe was mostly removed in the surgery. And, when the surgeon delivered the news, there was no stopping the tears that overcame me.

Then this gentle giant of a man stepped near and dropped a kiss on my head. Beloved, God will use whoever and whatever He chooses to care for our wounds. At that moment I felt seen and loved even though fear and grief were standing at my shoulder.

In the months that followed, my children and I slept on waiting room floors of the ICU or grabbed snatches of sleep from hospital chairs. I watched monitors beep and stole moments with the kids over a rushed meal at a nearby restaurant. There was also the grace of worshiping around his hospital bed and people meeting our physical needs. There were sunsets outside our hospital window and anointed conversations with perfect strangers. I was learning to exhale grief and fear and inhale the peace of His presence.  A year later they sent Alan home to hospice. We had just shy of two more months.

The day before Alan would have turned 47 the Lord woke me as I was curled up on the couch in our living room next to his hospital bed. My alarm was set for his next dose of morphine. Suddenly my eyes flew open and I was wide awake. I glanced at my watch, still 15 minutes until his next dose. I looked over at my beloved and his chest was not moving. My heart dropped. I reached over and laid my hand on his chest and felt him exhale one last time.

God woke me up to watch him exhale earth and inhale Heaven. His grace abounds.

Almost immediately God called us to leave our family, the farm, and the only home my children had ever known. He called us to follow His voice to a new home and a new life. What looked crazy to some was a walk of faith to us. This is where I want to say, “Do what God has called you to do, friend, over what is comfortable or expected.” Only our great God knows the road map forward for your life and the lives of your children.

We have been in Tennessee for almost 6 years now. Two of my children have spread their wings even farther, following the voice of God. God has taken the heartbreak each of us has endured and used it to gather our hearts even closer to each other and to Him. He has set eternity in our hearts so that we all hunger to see others filled with the same hope only Jesus can give.

I personally have accepted the call to write, speak, and share various places including in my podcast, Seek and Savor. My heart beats to equip people to move forward in hope, so I look forward to connecting with you more as we both continue this journey.

May I leave you with this verse? It has been an honor to share a bit of our story but only the words of God have the power to change the fabric of our hearts. And this verse is one I keep close to mine.

“I have set the Lord continually before me, because he is at my right hand I will not be shaken” (Psalm 16:8).

PrevPreviousWidowLife Wisdom: Her Wedding Ring
Next31 Prayers for the FatherlessNext