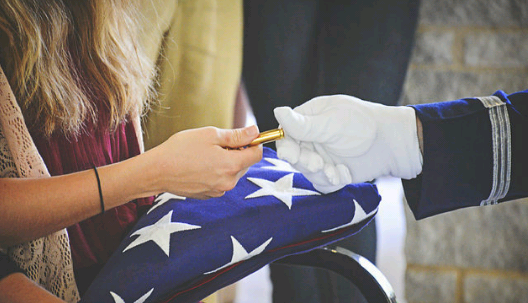 As a young high school girl, I began to grow a seemingly irrational fear. As irrational as the fear would have sounded to others, it was unquestionably real to me. My fear was of becoming a widow, specifically a young one. I had even vowed to myself to never, ever marry a man in the military, since a military man would only increase my chances of being a young widow. A couple years passed with this fear still lingering in the back of my head. Surprisingly, I ended up getting married while still in my teens to a boy named Michael who would join the military soon after we wed. (Never say never, right?) I loved him enough to accept that was what he wanted to do, and even though it scared me a little, I was his wife so I supported him.

Eventually it was official, Michael joined the military and not too long after we were living in Germany. So many amazing changes in such a short amount of time, and even more were yet to come. A little over a year of being married, we found out I was pregnant. We were both so excited and immediately began to mentally prepare for the big shift soon to come for our tiny family. Our life was good, in a completely normal everyday life kind of way. He loved his job, we had awesome friends, we lived in a beautiful village, we had a precious, little dog and a baby on the way. It was all so normal, and then suddenly one day everything was not normal at all.

It was a typical Friday morning for us. We got up about 5:00am, we had breakfast, talked about plans for my birthday, shared lots of laughter, and then Michael left for work after he prayed over us. I had no idea it would be the last time I would see him. I was nearly four months pregnant at the time, so I went back to sleep for another hour to get some extra rest. I woke up to a knock on the door, and when I realized I didn’t notice the car, I began to feel a little uneasy. I texted Michael letting him know about it, but I never received a response. Finally, my phone went off, it was my neighbor and friend to Michael and I, telling me someone stopped by saying that Michael hadn’t shown up for work. In the military, you don’t just not show up for work.

I ran down the stairs and out the front door still in my pajamas and a robe and knocked on my friends’ door, trying to learn as much detail as I could, but we were all clueless at that point. My friends and I spent hours searching for Michael, calling hospitals within a two-hour radius, and the language barrier only prolonged the process. These hours felt like days. That afternoon, I finally got word that Michael had been in a car wreck. I prayed and prayed for God to save my husband, to just let him live. God had answered that prayer, just not in the way I was asking.

I heard a car pull up outside, and I made my way out the door. I saw four men with somber faces and dress blue attire step out of the car. My stomach turned in disbelief and the only thing I remember saying was a very solemn, “No.” I had seen all the movies, but this was my life, not a movie, so it just couldn’t be real. But it was real, my biggest fear was really happening. We all walked inside, I was asked to sit down, and one of the four men proceeded to tell me Michael had died in the car wreck earlier that morning. I slumped into my dear friend’s arms, and I wept—and I wept hard. I had spent hours trying to cling to the idea that he lived through the wreck and was being taken care of in a hospital somewhere, but it just wasn’t so. I was three days shy of twenty years old and pregnant with our first child; this was not how I imagined my life to be. Eventually, I sat up again, and I looked down into the palms of my hands which had written on them, “For not all have faith. But the Lord is faithful.” And I spoke, “God is good,” reminding myself that God went before me, and it was not a surprise to Him. With that, I began my undesired journey of widowhood.

What was once just a seemingly irrational fear, is now my reality. I’m a young widow and a single mom to a precious little boy, and you know what? It’s okay. The road certainly wasn’t painless, but God has used it all to grow me deeper into Him.

God allowed me to enter into my biggest fear so that I could experience just how much bigger He is.

When I first began to fear widowhood in high school, I hadn’t yet entered into a relationship with Jesus. I know for a fact that I would not have the hope and peace that I have today if I didn’t have Jesus to walk me through this. He is our only hope.