Finding Joy in a Repurposed Life 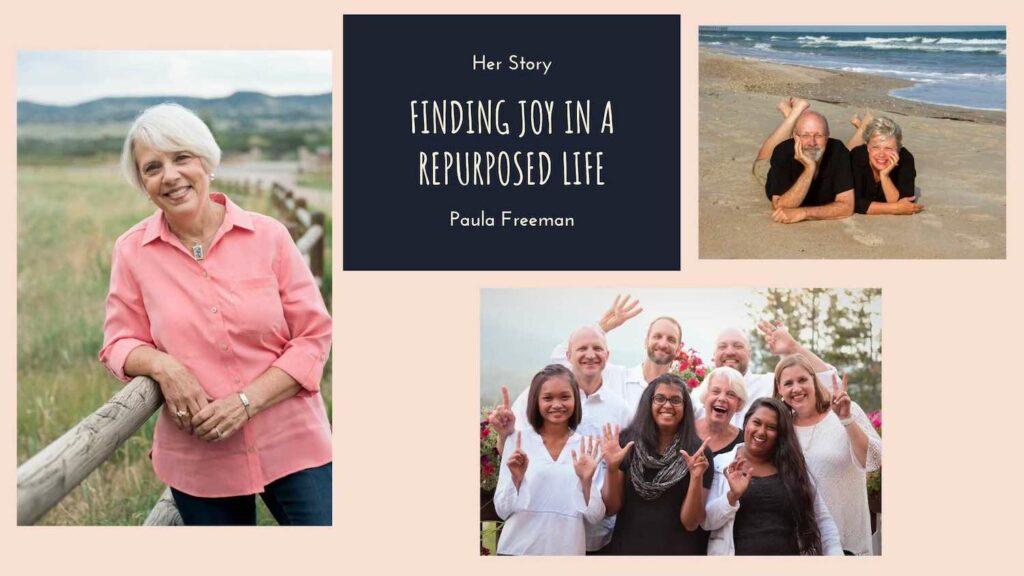 “Hey, do you want to go to the Nitty Gritty Dirt Band concert on campus tonight?” Ray asked when he called one Friday afternoon in February during my freshman year in college. He was one of the first people I met when I arrived on campus six months earlier and we had become friends through a campus ministry.

“Sure,” I said. It was late notice, but a significantly better option than spending an evening in the dorm. It wasn’t a date, just something to do with a friend. But things changed that night and our hike the following day was definitely a date. Friendship blossomed into romance and six months later I said “Yes!”

Ray and I married in June 1973. Seven children ensued, four by birth and three by inter-country adoption. After fifteen years as a stay-at-home-mom I returned to graduate school to earn my Master of Social Work degree and founded Hope’s Promise, a Colorado licensed adoption agency and orphan care ministry, in 1990. I served as executive director for twenty-four years but retired after we heard the words that upended our lives.

Paramedics rushed Ray to the hospital after he collapsed on a family walk in December 2013. Doctors released him nine-hours later after an emergency room stay that included observation for a concussion and a battery of tests. “We saw some scarring in his lungs,” one doctor told us as we prepared to leave. “Interstitial lung disease—you’ll want to follow up with that.” Both our fathers had died of this; we heard the death sentence in the causal remark. Those words sucked the air out of the room, stole our future, and shoved us into the medical orbit of doctor appointments, procedures, and hospitalizations. Three months later Ray’s pulmonologist confirmed the diagnosis. “But there’s no need to worry,” he added. “This could stay dormant for years.”

We packed the car, rented a house on Topsail Island in North Carolina for a month, and tried not to worry. We filled our days with beach walks and long talks, hoping to recreate a shared vision for our diminished future. We would return to Topsail as often as we could.

“I think I want to move here,” Ray announced one morning on a subsequent trip after driving through local neighborhoods searching out For Sale signs.

“Wow!” I said. “Why now? It seems so counterintuitive to leave our home, family, and friends at a time when we’re going to need them the most.”

“I know,” he conceded with a shrug. “But I can breathe better at sea level. And I want this quality of life for as long as I can.”

I embraced that adventure; it was the last thing I could do for him. Even his pulmonologist agreed. “Colorado is a great place to live but a lousy place to breathe,” he said. So, we stuck a For Sale sign in our yard and moved to North Carolina in August 2015. Ray died in my arms two weeks later. I chose to stay in North Carolina for what turned out to be an unrivaled spiritual journey.

My greatest fear since Ray and I married was that I could not survive his death. As a new widow I begged God to help me believe He would be enough—enough on messy days, at night when I’m undone by Ray’s empty side of our bed, and as I grew old alone. I wanted more than to know about God’s love. I wanted to experience the awe, the belonging, and the foreverness of it. I wanted to feel satisfied and fulfilled. I wanted to be whole.

Undistracted by the roles and responsibilities of my previous life I watched God unfold His gracious response during my nineteen-month set-apart season by the beach. Amid the grief, I heard a whisper, an invitation. “Come away with Me,” Jesus beckoned, inviting me to journey more deeply with Him. I did and discovered the presence of God in the wilderness of widowhood, and that joy can occupy the same space as sorrow. Journaling through tears and pain I received the healing graces of silence, solitude, and surrender while a still, small voice insisted, I will recover your life.

Recovering life from loss has meant letting go. Not just of Ray and our shared future but of lies I believed, like one that duped me into thinking I couldn’t survive his death. I let go of values from my former life that had become useless baggage and replaced striving and achievement with rhythms of grace that nourished my soul. I let go of busyness and found strength in stillness. I let go of marriage and grew to appreciate my personal freedom. As I let go of what God allowed to be taken away, I found joy in my repurposed life.

It’s been more than five years since Ray died. I still have messy days; grief is like that. But I am learning to be me without him. I want to continue the legacy Ray and I began in our family and finish well for both of us. But my greatest desire is to point people to Jesus, inspire grace for the hard stuff, and hope for the journey.

Paula Freeman, author speaker and adoption social worker. Visit her on her website and blog at https://www.paulasfreeman.com.

PrevPrevious8 Benefits of Trusting God
NextWidowLife Wisdom: Why church can be hard for the WidowNext