Every Day is Memorial Day for Our Family 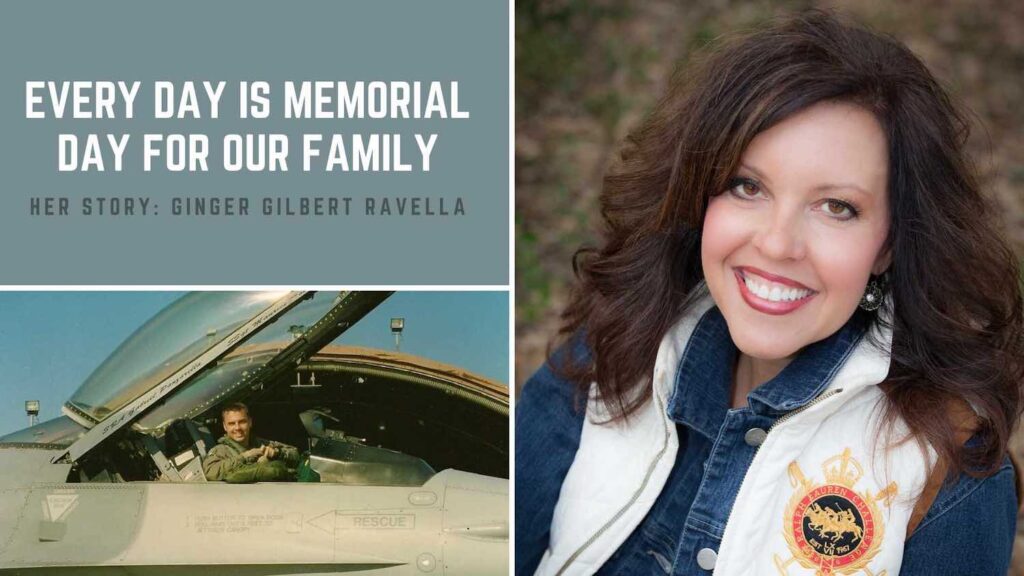 Ours was a traditional love story. I met Troy in college in Texas. He was quite possibly the most handsome guy I’d ever seen. Surprisingly, his heart was even more stunning. He was friendly, fun-loving and always loyal. He loved deep and wide and for 13 years I got to be the recipient of it all. Troy was the son of an Air Force family. He had lived all over the world and I was a small-town girl with limited travel. His dream was to fly fighter jets for the Air Force after college graduation. My dream was to be his wife, have his children, and live a life of love and adventure.

When I look back, even knowing how short our time together was, I can honestly say my dreams with him all came true. We were both first-borns, extroverts, passionate dreamers, and fairly strong-willed souls. We were teenagers when we met, so in many ways we grew up together. We knew how to argue and make up. We knew how to adapt. He expanded my outlook on the world. We grew in our faith in Christ together. We got to have the big family we longed for. Life wasn’t perfect – but it was ours and was never boring.

I once heard that courage is not about knowing the path but just simply taking the first step. In September 2006, as I stood in my kitchen and watched Troy kiss each of our five young children good-bye before deploying to combat in Iraq, I cried at the kitchen sink. As a military wife, I expected deployments and he had flown in some dangerous missions prior – but somehow this time felt different.  He had never been gone for 4.5 months. We’d never had so many young children (8 years to 9 months old). It was the peak of the war, and he was entering into the middle of a hotbed of conflict. Yet I truly wasn’t fearful and knew that if I had courage like he always had, then I could do it.

As I kissed him good-bye, I had no idea it would be the last time I would see him. Or that courage alone wouldn’t be enough to sustain us. Three months after he left, on the Monday morning shortly after Thanksgiving, I heard a knock at my front door. My boys were already at school (in kindergarten and 2nd grade). My 9-month-old twin girls were down for a morning nap, and I was in the backyard with my 3-year-old little girl, watching her jump on the trampoline. I’ve learned that it’s in those moments before tragedy we can never imagine how much we wish we would have cherished the normalcy more.

At the door I heard the official statement, “Mrs. Gilbert the US Air Force regrets to inform you that your husband, Major Troy Gilbert and his F-16 have gone down earlier today in a combat mission west of Baghdad…” Words that would drastically alter the course of all our lives. I would learn that Troy’s heroic flying efforts and bravery in battle diverted and killed the enemy and saved over 60 U.S. Army soldiers. I would also learn that, to my horror, Troy’s body was taken by Iraqi insurgents before U.S. forces could recover him. A very small amount of his DNA at the crash was positively identified and it was determined he would have been killed instantly.

At least I knew Troy was home with the Lord. He was at peace, but it was then that my war began. I was angry at God for taking such a godly man – my beloved husband and father of our children. Troy was a model fighter pilot, a faithful servant of God, country, and our family. I was a widow at the age of 36. My children were fatherless. I was full of anxiety and fear of the future. I battled insomnia and depression. The days were dark as the search for his body continued but our lives were cruelly forced to go on. I wondered whether the God I had always loved was trustworthy in such dire desperate circumstances.

All my life I had heard the popular verse Psalm 23:4, “Yea, though I walk through the valley of the shadow of death, I will fear no evil…” Little did I realize how literal and terrifying that valley could feel. Yet on the contrary, little did I realize that the power of Christ could lift me out of that same valley.

“Because of the tender mercy of our God, by which the rising sun will come to us from heaven to shine on those living in darkness and in the shadow of death, to guide our feet in the path of peace.”

I discovered the Lord is the only One that can rescue, the only Way out of the darkness, the only Hope that endures through the fire. I had to make the choice to not turn my back on Him because He did not turn His back on me at the Cross when things got painful and His own world turned dark. In the 13 years since Troy’s been gone, we have seen many miracles and much healing – a new blended family, a ministry, and a miraculous recovery of Troy’s remains, brought back home to the country he loved and served. Every day is Memorial Day for our family. And though my heart will forever grieve the loss of my soulmate, I do not grieve without hope.

PrevPreviousWidowLife Wisdom: Weddings and Funerals are Hard for the Widow
NextA Prayer for the fatherless on Father’s DayNext